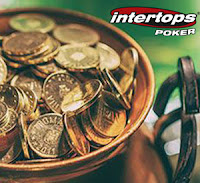 St. Patrick's Day honors the patron saint of Ireland and celebrates the heritage and culture of the Irish in general. Celebrations usually involve parades, parties, green costumes and green beer. At Intertops Poker, there will be a $3000 GTD St. Patrick’s Day Poker Tournament. Players can win their way to the March 17th tournament in $3 satellites held twice a day March 10th to 17th.

The St. Patrick's Day Poker Tournament is a Progressive Bounty Special. Every time a player knocks out another player and collects their bounty, their own bounty increases.

"Progressive bounty tournaments are more fun and more thrilling than standard bounty tournaments," explained Intertops Poker's manager. "You collect half their bounty when you knock a player out, while the other half of the bounty is added to your own head. The better you are as a player and the more opponents you knock out, the more cash you collect and the higher your own bounty gets!"

Intertops Poker is the busiest poker room on the worldwide Horizon Poker Network and offers hundreds of slots and table games in its Casino Games section. This year Intertops – the world's most trusted online gambling brand -- celebrates the 25th anniversary of the very first online bet, taken in its online sportsbook in 1996.