Friends Take Each Other to Tournaments 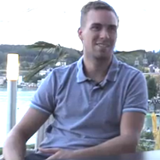 Péter Gál is a big fan of Velden -- this year was the first year that he won his way to the European Poker Championship in an online poker tournament, but it wasn't the first time he's played the Poker EM European Poker Championship. Last year his friend Daniel won a satellite tournament at Intertops Poker that awarded an all expense paid trip to the Austrian spa/casino resort.  Since Intertops qualifiers can always bring a friend to the live events, Péter tagged along.

Last year Daniel won an online satellite tournament at Intertops for the Punta Cana Poker Classic and they went to the Caribbean together. To even things out, Péter thought it was time to level the score and managed to win a satellite to Velden this year.


Peter talks to Rikard about being an online pro for nine years, his education, and his plan to win another satellite on Intertops and bring his friend Daniel to St Maarten in November.

Note: The video we had posted here is no longer available.
at 17:33