If These Guys Can Do It, So Can You!


There’s some serious money to be won at a big tournament like this, and that attracts lots of professional players, like “Homeless Millionaire” Faraz Jaka, Twitch poker wiz Doug Polk and Josh Beckley, the second place finisher in the 2015 World Series of Poker Main Event.  But since so many players won their trip to Punta Cana in online satellite tournaments, there’s a lot more recreational players living the dream at their very first live tournament.  I talked to a few of them at the beach party Saturday night. 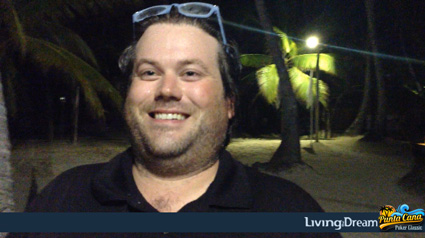 “It’s been great, you can’t beat it!” said a tournament newbie Scott McKenzie from California.  “For just $50 I won a $4900 package playing The Beast tournament one Sunday night.  I cashed out my buy-in and hit forty-first place, so it’s just been a great overall experience."

"This is my first big tournament so I was really nervous.  Everyone told me I was playing way too tight  -- but I think that’s a great thing to hear from the best in the world!” 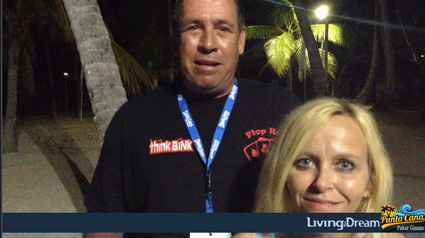 This was also a first for John and Raquel from Pittsburgh.

“This is a once in a lifetime experience. I’ve always wanted to go somewhere to play a big tournament like this.  I wasn’t thinking here though! I was thinking maybe Denver or somewhere like that.  This is just out of the world for me!”

“I actually got into the Caribbean ocean!” said Raquel.  “All the way up to my chin – that’s a first for me!

Faraz Jaka on His Life as the Homeless Millionaire 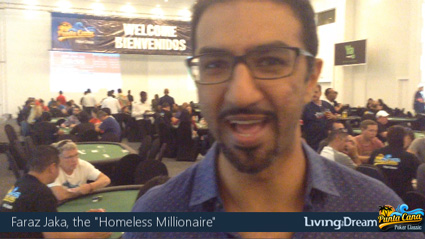 One of the most interesting players we've met at the Punta Cana Poker Classic is Faraz Jaka, nicknamed the Homeless Millionaire by CNN.  He's a professional poker player who's really living the dream.  He’s travelling the world from tournament to tournament so much that he gave up his home entirely years ago. Now, even with more that $8 million in career earnings, he lives from a suitcase with just the essentials: a few pieces of clothing and a laptop.

Sounds great. But is there's got to be a catch, doesn't there?

“I’ve just been playing all week. There’s a high roller event here today too so I haven’t even got to the beach, haven’t been in the pool.  I’m on tour hardcore for the rest of the season – I’m going to Macau, I’m going to Prague… where else… oh ya, I’m going to Florida…  I’ve got a lot of poker in front of me so I need a beach day. I might make that a priority today!”

“I obviously love being on the road. That’s why I do it, but there’s definitely some things that you wish you had. It can get frustrating sometimes."

“Even just, you know, I do a lot of my shopping on Amazon, just everyday shaving needs, all the right organic products I need, and sometimes it’s really hard to do that when you’re abroad and don’t have an address for them to deliver too!”

“On my way to Macau I have eighteen hours in Chicago. So I’m, like, messaging my Chicago friends – hey, want to meet for dinner? And can I send like five Amazon deliveries to your place? And can you bring them to dinner!?”

I asked him what advice he’d give a some he said to just be careful about getting caught up in the jet set poker lifestyle. First class flights… fancy restaurants… five star hotels… If you want to last, better to stay grounded.

Apparently Twitch poker guru Doug Polk hadn’t heard that advice! After indulging in the lifestyle the night before he slept through the first three levels of Day 2!

Neither of these pros made it to the Final Table, but they’ll be there to cheer them on and  to see who walks away with nearly $150 grand.
at 14:03 No comments:

Tyler from Missouri is Living the Dream at the Punta Cana Poker Classic! 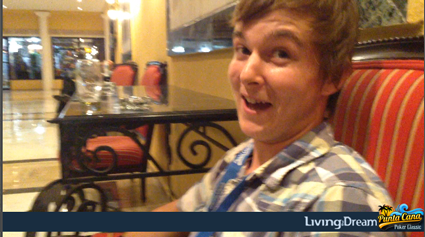 If ever we've met someone who’s living the dream, it’s Tyler, a young player from Missouri that we met outside the tournament hall yesterday.  Tyler won his way to the Caribbean in an online tournament and, after Day 1, he’s got over 70,000 chips and is in the Top 20 heading into Day 2.

Tyler’s never played an action packed live tournament like the Punta Cana Poker Classic. In fact, he’d never even been on a plane before!

“If I just place, that’s good enough for me.  But if I win I guess I’ll buy some stuff for my car,” said Tyler.  “Folks back home won’t be surprised to hear that!  I guess I’d invest a lot of it – and set some aside to go to the WSOP and try my luck in Las Vegas!”

Tyler’s got to be about the youngest player here in Punta Cana.

“I guess if I start to feel too intimidated I’ll just put on my sunglasses,” he laughed.

“This next day could be a little difficult, since the antes and the big blinds… But as long as I play good – not too tight and not too aggressive – I should be fine.

UPDATE: Tyler ended up placing 41st in a field of over 160 players, winning about $4500. He returned to Missouri a very happy guy -- already planning to win another one of Americas Cardroom's Sunday "The Beast" tournaments come back to Punta Cana next year and win it! Great hanging out with you Tyler. See you again soon!
at 12:27 No comments: 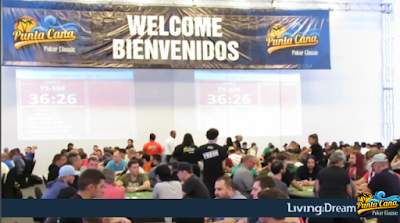 Online poker players living the dream at the Punta Cana Poker Classic agree: the move to the new location was a good idea!  Better food… closer to the beach… and the new Poker 2.0 game rocks!

We arrived yesterday afternoon just as the players were sitting down to the Main Event, Day 1a – everyone excited and hoping they’ll be the one take home the big prize. Like Luis Yepez did last year. He took home more than $185k!

This year the Punta Cana Poker Classic moved from the Hard Rock to the Melia Caribe Tropicale – a wise move, according to a couple of regulars. “I never thought we could do better than the Hard Rock, but this place is really nice,” said Steven Schillenberg, who’s been playing this event for eight or nine years, since it began in Costa Rica.

“The new game that they have, the 2.0, it’s actually really, really good,” said Steve Lets, another player from the trusted US poker room who’s been coming to this event for many years.  “I’m really getting into it! I think the more you play it you’ll enjoy it even more.
at 08:02 No comments: 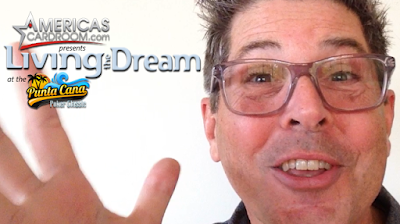 We’re on our way to the Caribbean again with another group of online poker players for the action packed Punta Cana Poker Classic. We’ll be there with video cameras so you can see what it’s like to win your way to a big money live tournament. Check back October 27th for our first video from Punta Cana.

We’ll be hanging out with online players and chatting with them in our videos.  Twitch poker guru Doug Polk will be with us so we’ll have comments from him on the tournament as well. Faraz Jaka, the Homeless Millionaire, will also be with the our entourage!  (CNN gave him that nickname when they found out he’s won millions in poker tournaments all over the world – but doesn’t have a home and lives out of a backpack.)
at 16:54 No comments:

4 Online Champions are on Their Way to $500K PPC Aruba


Four players that won online satellite tournaments at Intertops Poker and Juicy Stakes Poker this summer are on their way to the Caribbean for the PPC Aruba World Championship.

One member of the team, Joan Sandoval, placed 6th in the $5000 GTD at PPC Aruba last year and is looking forward to playing the Main Event this year.

“I know a lot of my competition in Aruba, actually. I know it is going to be a tough crowd with a lot of good professional players” said Joan from her home in Wisconsin.  “My strategy in any bigger tournament is to play one hand at a time and concentrate on just my table and not so much everyone around me. I like to just study the people and limit big pots in the beginning and try to play premium hands...try to get a solid image on the table so I can make my occasional bluff.”

Joan will be joined by Tim O’Keefe and John Curcuru, both professional poker players.

When he’s not grinding online, Tim plays mostly in casinos in Texas where he lives and in nearby Oklahoma. He also travels to Foxwoods a few times a year.  This is the third time that Tim, who only recently quit his day job and turned pro, has won his way to a major live tournament like this.

No stranger to the casinos of Las Vegas where he lives, this is the second Caribbean junket for John.  Also an avid chess player, John joined the Living the Dream team at the TKPT tournament in St Maarten this spring.

“It’s great travelling with a group like this,” said John.  “The camaraderie really helps you cope with the pressure of the tournament.  They took very good care of us last time so I’m really looking forward to joining them again!”

The fourth member of the team is Texas poker mom Ashley Hine. Ashley works with her father building luxury custom homes but hits the casino several times a week.  PPC Aruba will be her fourth live tourney.

“I expect the players to be a smart, tight group, everyone hoping to make money and make a name for themselves.  I think it’ll take massive determination and discipline.  I always say it’s not the hands you, play but the folds you make that can make you a great player.”

All four online satellite tournament champions won $5000 prize packages that include $2,400 buy-in to the Main Event (November 4th – 7th) and accommodation on Palm Beach at the Hilton or Hyatt Resort. Their prize packages also include travel expenses, one $200 tournament buy-in and one $300 buy-in.

The PPC Aruba World Championship is one of the most exotic stops on the Poker Players Championships circuit, now in its fourth season, which includes high stakes events all over America.