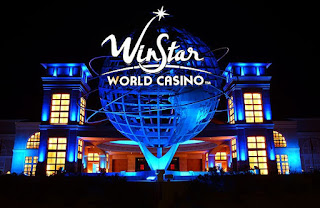 We have made it full circle! Back to the Winstar River series and back to where it all began! It was this series last year that started it all and set me off on this amazing adventure! I came in fourth place in the massive kick off event for this series last year that boosted my roll and my confidence to lead me to finally chasing the dream and playing poker professionally. So needless to say, I had high hopes going in to this one! Winstar is only about 45 minutes from my home in Ft Worth, so its my "home" casino now. It's a pretty insane casino actually, it says in the advertisements that its the biggest casino in the world! I'm not sure if that's true, but seeing as it literally takes about 10 minutes to walk through the casino from the hotel to the poker room, I'd have to agree with them! lol 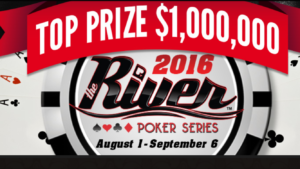 So I didn't waste anytime after getting home for Foxwoods and the next day I hit a mega satellite for a main event seat! I was off to a slow start, but hit some big hands when it mattered late in the tourney. So as long as nothing crazy happened, I had enough chips at that point to basically coast to a seat!  I hung to my stack and got a $2500 lammer(chip) to use for either the main event or other tourneys throughout the series! So great start to the series and the next day I fired a "free" bullet at the first event, the $400 buy in, 300k GTD! I was off to a slow start and couldn't get much traction to get a run going all day. I had some decent hands here and there, but just stayed about average or a little below average all day.  Things then went south a late in the day, I lost big hand that would have set me up for a good run. With blind levels at 400/800 w 50 ante, I opened to 1800 from middle position with Ace Ten of diamonds. Everyone folded to the big blind who had just come over to our table about ten minutes ago and brought a Big stack of chips with him.  The flop came King, King, 3 with two diamonds. He checked and I bet about half pot. It was obvious this guy was a recreational player and figured a small cbet would just take it down right there and if not, I still had the nut flush draw going for me. He made a puzzled face before making the call, which made it very obvious he had a King in his hand! lol dammit! I told myself it was over, until I saw the beautiful 4 of diamonds hit the turn!! He checked to me and I decided to be sneaky and check it back. I thought maybe he could have been drawing to a smaller flush and I could get him to bet into me on the river so I could potentially stack him. Unfortunately, the 3 of clubs hits the river and he instantly leads out with a 1/2 size bet! Ugh!! I convinced myself there was a good possibility he was bad enough to bet a worse flush there and begrudgingly made the call. He showed the full house and my stack was cut in half! I was then moved tables and got grinded down by blinds and antes until I only had about 5 big blinds left! I got very lucky when I jammed King Ten of clubs into pocket Queens, and hit a king right on the flop to double! I managed to run it back to a decent stack somehow and cruising along for a while, just to run my Ace King into Ace Queen in an all in situation and watch a Queen hit the flop and send me home! Gross!! 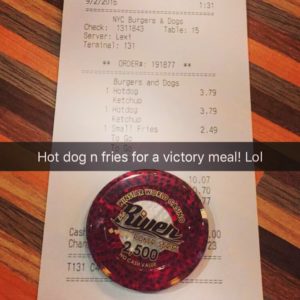 I fired another bullet at the 300k GTD, but this time it didn't feel "Free" lol. I ran pretty recent again, going deep but nothing special til the very end. I had a friend move to my table and I told the table " well this is who I'm gonna bust to, I might as well just give her the money now! " It got a good laugh from everyone, but I clearly jinxed myself as literally the next hand I was knocked out by her! OOPs! lol I was pretty card dead and the blinds were getting really high, when I shoved pocket jacks over her middle position open. She actually thought about folding before finally making the call with  Ace King off suit. It was a pretty standard spot and was happy to have the chance to double up via coin flip there. The jinx was real though and an Ace and a King hit the board and I was out of the event. So no repeat performance for me this year, but I was happy with my play and I was basically free rolling it, so can't complain too much. I took a day or two off and then went right back to it, to play a couple more mega satellites! I struggled in the first one but at least made it all the way to the end to creep into the last place that got paid.  It wasn't another lammer but enough to make a small profit and pay for the next mega satty I immediately jumped into after lol! This tourney went great right from the start! After a few early big pots, I had knocked out a few players and by about the 3rd level I knew I was in a position to go on cruise control til payday! It worked out and I was officially two for two on mega sattys and $2500 lammers! So I took the the next day off to give my poker brain a break and enjoy some relaxation by the pool. Life's rough ;) 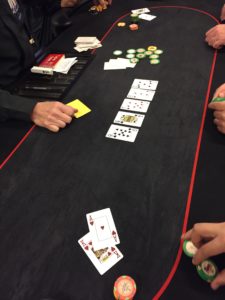 The main event started out a little scary when I clearly had one of the worst table draws I could imagine. I was sandwiched between two big dog circuit grinders, one who was just off a final table in the main event at the WSOP circuit in foxwoods that I had just come from! Yikes! They did not disappoint as the 3 of us were immediately in constant 3 betting battles! It was fun but very challenging, really putting the poker skills to the test. The rest of the table weren't slouches either, but none were on these two guys level. I had a bit of a roller coaster day because of the constant 3 and 4 betting with them, but still felt pretty comfortable. I was 3 betting light quite a bit until the pro on my left decide he was gonna 4 bet big every time I did it. It was like he could see my cards lol not cool! I had to calm down a bit and tighten my play before I could go back on the attack. I got the opportunity sooner than I though, when I looked down at pocket Kings on the button and the aggressive pro on my left had raised yet again! I knew if I flatted the pro my left wouldn't be able to resist making a squeeze play there with basically any two cards, so I decided to just flat the open and set the trap! I was getting a little low on chips by then and thought if he raise at all he would be commited to call off badly. He did just what I hoped an raised 4 times the open! The initial raiser quickly folded and after I took a few moments, I tried not to look too excited when I announced all in. lol To my surprise the squeezer folded almost immediately even though he was getting about 3.5 to 1 to call! I was shocked and obviously disappointed. But hey I made a good play and I had more chips lol so I should just be happy with it! Sadly I didn''t have them for much longer as a few hands later I got Ace King of hearts in the lojack seat and opened to 1800 at 400/800 with a 50 ante. I was hoping this would be a big hand for me to get some serious chips and build some momentum. I got my wish when the button, an older asian guy, who had 3 bet me twice already that day, reraised it to 6500! It was a BIG(too big) 3 bet that was enough to commit me to going all in or folding. I don't know if that was his intention or he just felt think 6500 was the magic number? lol Obviously I'm never folding there, it was an easy all in shove for me and I couldn't have been in a better spot when he quickly called and turned over Ace Queen off suit! I guess either he just didn't believe me, felt like he committed himself to a call, or maybe just felt like gambling!? Either way I was pumped and the flop came out all blanks not providing any sweat for a draw for him. Then AGAIN disaster struck as he binked a Queen on the turn!! No King for me on the river and for the second time 3 events AQ had out drawn my AK to bust me! OUCH! Definitely not cool, but as they say, you can't be results oriented! I  made the right plays and got people to put their money in against me when I was a HUGE favorite! That's all you can really do, right? That's poker for ya! 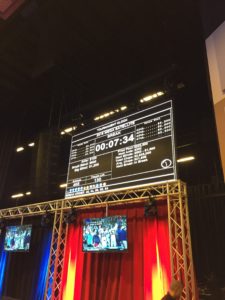 The "jumbo tron" late in the satty lol

So it's on to the next one! The next one live won't be til Aruba with Intertops for the PPC 500k GTD! Can't wait! But, for now, it's nice to have a well deserved break in my poker traveling and get to spend some much needed downtime with friends and family. Gotta stayed balanced people! Time for some trips to the pool, TV show bingeing, good food and some drinks! It won't be all fun and games though, as I will be bringing Intertops to the Twitch world, Streaming as much as I can! So if you haven't check it out yet, be sure to head over to www.twitch.tv/2fit2fold!  Come watch me play our nightly tourneys as well as the Sundays majors including our 5k GTD and our satellite tourney to whatever amazing place they have lined up! lol Hope to see you there!
Run Good!
Tim
at 15:59