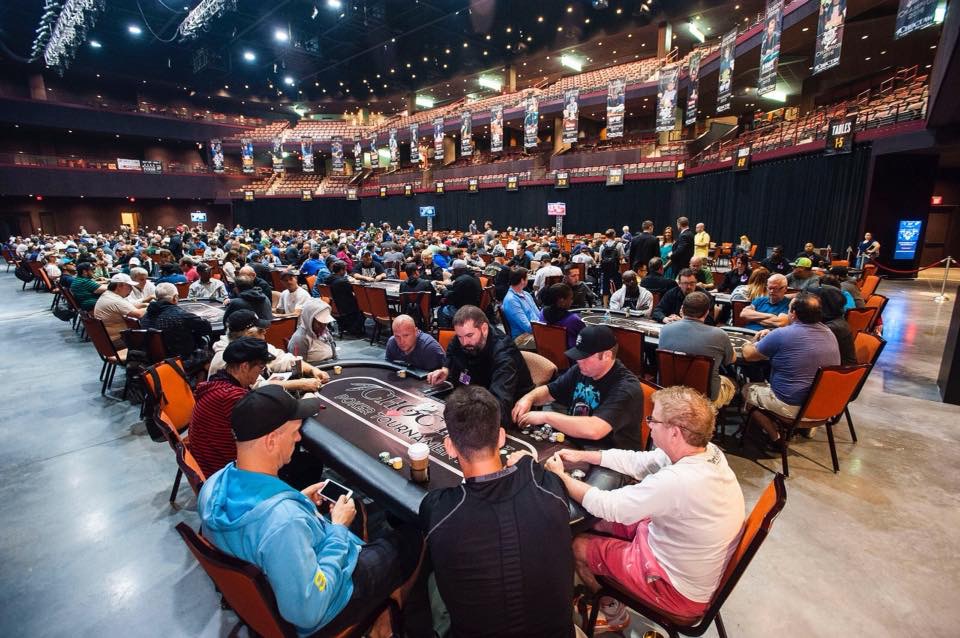 Well as you can see, I didn't waste anytime after Velden! It was an amazing trip and was tough to leave such a cool location, but the grind never stops! The WPT was already in full swing at Choctaw Casino when I arrived back, and if wasn't for a brutal layover in Chicago, I would have been there 8 hours sooner! lol Things went smoothly for the first two flights, but it came to an abrupt halt on my last layover. I got all of 3 hours away from being home in my own bed finally, just to find out O'Hare airport had different plans for me lol! A 2 hour layover turned into 6 hours and the plan was ruined. I was absolutely exhausted. By the time I got home, I knew there was no way I could make it to Choctaw for the first big satellite the next day. After a decent nights sleep though, I did make it for the 5pm, 5 seat guaranteed satellite, but busted just 10 away from a seat! I got into a big hand with AK off suit and somehow lost after flopping top two pair! 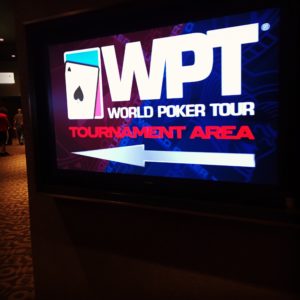 I raised from under the gun to 900 at 200/400 with a 25 ante and the next player(pretty passive calling station older guy) insta called. It folded around to the button, who was also the big stack(who was only the big stack cause he was a luckbox lol) raised to 3000. I had around 15k and thought about shoving, but this was literally the second hand after the break, which was the end of late registration/rebuy period, so I decided to  just flat and see the flop. The next player called as well. The flop come AKQ, ALL spades! lol So while Im happy I flopped top two, the board is crazy, and I'm not exactly sure what my play is. I thought though with the structure being so fast and having such a huge hand, there's no way I can't try and get it all in here. Still not sure about that, but thats how it played out. I checked, next player checks and the button 3 bettor makes it 4500 to go. I thought for a minute and shoved, only to have the next player snap shove all in as well. OOPS! Thats never what you want to see, but giving that he didn't re-raise me preflop, I thought I was probably still good?? The button tanks for about 2-3 minutes and then finally folds AK off suit face up...Well now I really hope I'm good cause a full house doesn't look like it's coming lol. The other player turns over JJ with the jack of spades for a royal straight flush draw. I was pretty shocked by the way he played every street with this hand, but I don't know if I could have folded there either, trickey spot? Well the turns a blank and I'm fading a spade, a Jack or a 10 on the river for a real good stack to probably coast to getting paid, but ..bink...a 10 of diamonds hits the river for the guy and I'm out. Ironically enough finishing 10 places from getting a seat to the main! AArgghhh lol 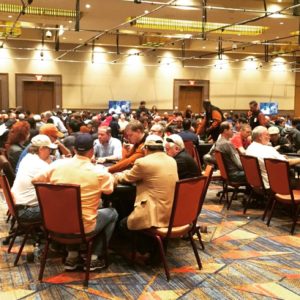 I played a little cash afterwards and made my money back, but nothing special to report there. The first night was still kinda slow and I was mentally and physically still drained anyway. I needed a good nights sleep and a good workout to get myself back on track! Unfortunately for me, the guy I was sharing a room with snored like a chainsaw, and that didn't happen lol I was a Zombie the next day for the most part. Next time I'll splurge for my own room! lol I managed to man up and force myself to get through a quick workout in still, as It usually still energizes me for the day. I was glad I at least got something in and it did help a bit, actually coming close again in another satty! This time they were giving away 20 seats and I of course finished in 30th place lol. AK failed me again, but in much less dramatic fashion this time. I shoved AK off from the cutoff for about 7 big blinds, just to get snapped off by the guy right next to me and his pocket Kings! The board whiffed me completely, no sweat at all, and I was out again. I'm not too upset though, as satellites are mentally brutal and a completely different tourney than usual. So while I'm disappointed with not being able to play the main, I can't complain too much, especially given the circumstances! lol Two close calls in two days isn't all that bad a showing!
Still I didn't follow through with one of the main things I learned in Vegas already and it may have cost me a seat at the main event! I know my friend can't help it, but I shouldn't have been cheap about it. While saving money on rooms and just trying to be friendly or social is always nice; for me, sleep is more important! My friends will understand! lol Maybe I'm just getting older or am too set in my ways, but my main goal is to win and I need to be able to perform at my best everyday. Hopefully that's yours too, don't let anything stand in your way. Real friends will understand, do what you need to do. 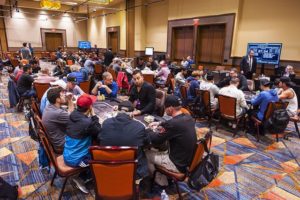 So I missed out on playing the big one, but I had a few poker friends make VERY deep runs in the Main event, both finishing in the top 15!! So at least I got to sweat their action and see the last few tables play out for a while. There were some very talented players going into that final day, and it was cool to see some local pros mixed in with the big dogs like Phil Helmuth, Olivier Busquet and Jeff gross! I'm glad to say they held there own and made us all proud! And no worries guys, it's on to the next one!!
Run Good
Tim 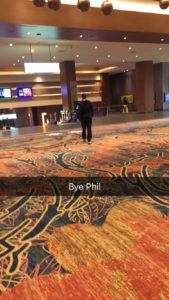 Helmuth and his gold shoes!