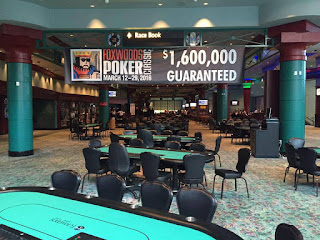 Well I think I’ve officially earned “Grinder” status at this crazy game!  What a sick few weeks of poker I've just played!  I just came from the Foxwoods Poker Classic series in CT and while it was A LOT of fun, I can’t remember a more brutal series grind than this! (And I have played an entire series before and not so much as min cashed! haha)  I'm talking about playing 11 hours before busting out!  I played 11 hours for 5 days straight, just to start the series off! It was rough! lol

On top of that, I literally busted out of 6, (SIX!) different tournaments with AJ! Every time I got it in really good, just to get super unlucky, with all of them being very deep into the tourneys! I could probably change the title of this post to “How to lose with AJ” ! As an added kick in the nuts, another weird coincidence was that 4 (FOUR) of the 6 times I got knocked out, my opponents had a Kx hand! King 4 suited, King 8 Suited and King 7 twice!! Yikes!  What are the odds off that, getting knocked out holding the same hand, against basically the same hand 4 times! So SICK!! I think the Poker gods or Karma was against me for some reason! Not cool! I guess it was a good and bad thing though, as I was playing well enough to make several very deep runs in decent sized fields with a lot of good players. 😉

I placed in the money 3 times over the 2 weeks I played. Starting with a 21st out of 320 players, a 13th out of 282 players and a brutal FINAL TABLE BUBBLE of 11th out of 300 players!  Also, two other tourneys I played for about 10-11 hours before busting BOTH times 10 places off the money and moving to day two! So yea, like I said, Brutal lol But I did at least make some money back! Oh and I had one real good day playing cash games that helped cover the losses, so can’t complain too much!;)

Overall, I’m very happy with my play, I made a lot of real deeps runs, I felt confident at the tables, and played very consistent throughout the series!  Of course, it’s still always disappointing to not come home with a win, but all I can do is shake it off, learn from the experience and bring an even better game to the next series! I know I had quite a few leaks in my game that I need to plug before the next series. We should all be constantly trying to improve! So I’ll post those mistakes soon and hopefully I can get some feedback before Choctaws “Poker Night in America” series kicks off.

And then, I'm off to the Caribbean after winning an online satellite tournament at Intertops Poker.  I'll be playing the TKPT tournament in St Maarten last week of April.  Livin' the dream, baby!!!