Frustrating Tournament, but I had a Fantastic Time in St Maarten! 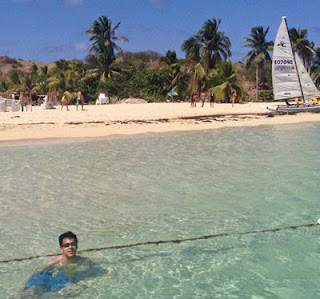 These online poker players won they're way to the live poker tournament in the Caribbean by winning online satellite tournaments.

LIZtotheLIEU shares his adventure on the tropical island:

The tournament started at 1:30pm EST. My table consisted of a mix of older guys who seemed like CPPT regulars, locals, and a younger guy who likely qualified online. No one I recognized though. Starting stack was 30,000, 50/100 to start, 50min blinds. So, a decent structure for a $1,650 buy-in.

I felt quite comfortable from the start, as I was able to pick up some good reads on the other players. Unfortunately, I was card-dead for most of the tournament and never really got above starting stack. I might have played like 3 hands and had 27k before the first break. Nothing really memorable...I did have one hand where the blinds were 150/300/25, I had Qc8c in the SB, folded around to me, I raise to 800, BB calls. Flop comes 732cc, I bet 650 (small bet to improve implied odds) and the BB raised to 1400 (small raise). I thought it was an interesting raise; He was defending pretty wide, but I didn't have him on a draw as it's a relatively dry board and I had 2 of the clubs, so I thought possibly 44-55 or 88+, or even two overs (Ax or Kx) with a club. Anyway, my hand is too strong to fold, so I thought either raise or call. Given we're in Level 2, it's too early to risk all my chips, so I call out of position. Turn is a 4, I check, he quickly checks behind. River is a 6 (so board is 76432cc). But, even though I missed and just have Q-high, I thought his check on the turn was very weak and (unless he raised flop with 45 or something), it's more likely that he hates the turn/river. So I stab for 1675 and he quickly folds. But that still only got me back to ~30k!

Next few levels, again nothing really of note, I did get a few 3-bets through to stay afloat, but otherwise just a lot of observing lol...think I had ~27k after the second break. 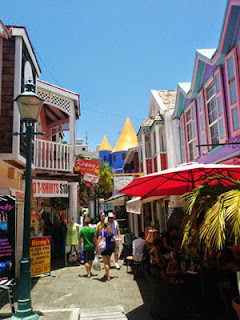 After the second break (level 5), things went south pretty quickly. I got 3-bet a few times from tighter players, so I just opted to fold. There was also one hand at 400/800 where CO limped, I picked up AKs on the button and raised to 2200, and the CO opted to just flat with a short stack (~14k behind). Flop comes down 952 rainbow, and he check-raised all-in after I c-bet (mid-pair seems most likely; thought about checking behind, but his "turn bet vs missed cbet" was 100% at that point and I thought my hand was still too good to fold).

Anyways, I then started getting blinded down and was down < 10k in Level 6, with the blinds at 500/1000/100...finally looked down at QJo and got a shove through, then 66 next hand and got another shove through...next hand after that, shoved again (third time in a row) with 99, and...well, you can read the summary from Cardplayer below:

Rafael Abrahamayan Flops an Ace
Posted: Fri, May 01, 15, 3:19 PM
The player under the gun+1 moved all-in for 14,200 and action folded to Rafael Abrahamyan on the button. Abrahamyan moved all in for 13,600 and action rested on Allyn Shulman in the big blind. Shulman asked which stack was bigger but then folded A K face up.
Under the gun+1 showed 9 9 and Abrahamyan tabled A Q .
Abrahamyan flopped a pair of aces when the dealer fanned A 4 2 . The turn was the 7 and Abrahamyan picked up a second pair when the Q opened on the river.
Under the gun+1 was left with 700 after the hand and was eliminated on the next hand.

So yeah, that was my tournament...frustrating overall, but thought I played OK, just not my day. On the bright side, I had a fantastic time in St. Maarten before and after the tournament.  I look forward to qualifying for a future event!